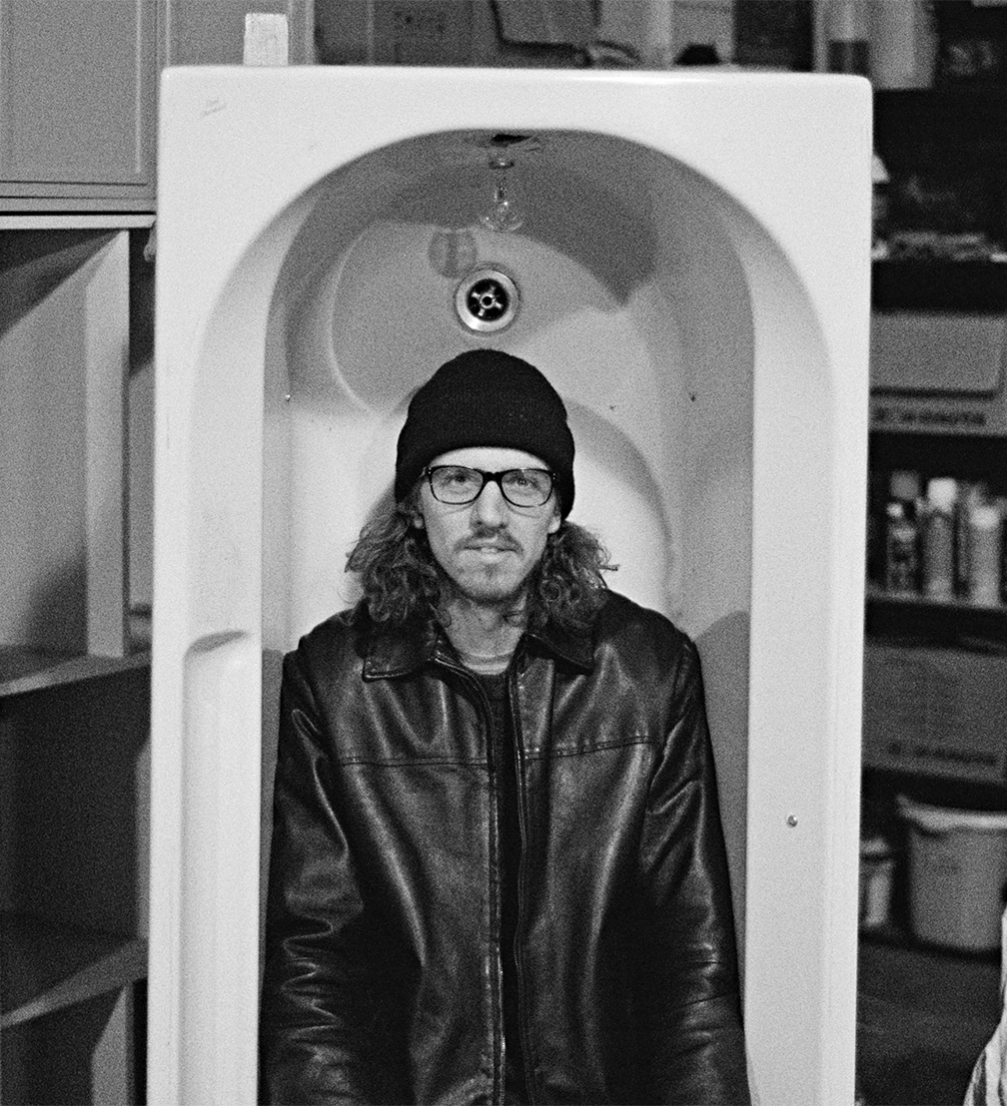 In his creative work young Latvian designer Mārcis Ziemiņš combines a contemporary approach with traditional values that shows both in the materials he uses and the way he thinks. The Smallest Sauna on Earth, a graduation project at the Eindhoven Design Academy, is his most renowned work.

Mārcis Ziemiņš doesn’t avoid hard work and isn’t afraid to get his hands dirty. On the contrary — he would rather split stones, saw wood or test seaweed than spend time in front of a computer screen. Besides personal projects, the versatile designer creates scenography and design objects for sophisticated gastronomic performances where he, despite the etiquette, not only invites others to «play» with their food, but also himself toys around with brave and playful ideas.

A couple of years ago you graduated from the Eindhoven Design Academy, one of the best design schools in Europe. Why did you choose to study there and what have you gained from it?

I was working as a graphic designer at several advertising agencies and a printing house, but as the financial crisis was approaching the workload decreased, so I began searching where to study. At first my aim was Central Saint Martins in London, but at that time my portfolio wasn’t strong enough and my application was rejected. When designer Germans Ermičs, an acquaintance of mine, encouraged me to apply for studies in Eindhoven, I dedicated a whole year to build up a portfolio. I thought up the briefs and realised them myself. In the first year, I tried out everything the school had to offer, and in the second year I chose the «Man and Living» department. Primarily I wanted to challenge myself, because it is one of the hardest departments; secondly, I began to understand more and more that I want to spend more time living instead of working on the computer. If I have to make a poster, I prefer to create something, for example, on the wall and then take a photo of it. I want the physical work to come before the digital, so that vectors on the computer wouldn’t be the starting point.

«Man and Living» paid a great attention to material studies and did it in a very contemporary manner. However, it wasn’t enough to have just a strong concept — to present one’s idea, it had to be elaborated. I find this approach very beneficial. Of course, the studies opened up a new view of the world — when there are people from 12 different countries in one class you are able to see what a girl from Singapore does, how she works and thinks. Or guys from Amsterdam, Berlin, USA… It opened something in me, I could see where I stand, what I am capable of. I understood that Latvians are a hard working people, but the competition and the global scale are also large. To be honest, rules are the same everywhere — if you create high–quality work, you receive recognition. To know the right people in the right place at the right time is also important.

Internship is a compulsory part of the studies. Tell us about yours!

I didn’t want to do my internship in Holland, as after three years there I felt I needed more diversity. I went to India, which was my first choice, but the plan fell apart, I didn’t find myself where I wanted. Then I got in touch with Julia Lohmann from Hamburg — she works with seaweed in a very experimental, conceptual way. I was attracted to her approach to work, her sense of humour and that she had received a six–month artist’s residence at the Victoria and Albert Museum in London, a city where I had wanted to live for some time already. In the beginning, I did everything an intern must do, there was a lot of material tests. We used a wide, about six meters long algae from Japan which expanded and shrank depending on the moisture; it was very peculiar. Julia is concerned with how to use it as a leather substitute, she laminates, sews the algae. She tests the limits of the material. As in the beginning there were only two of us, she trusted me and we made decisions together. At the end of the residence I wanted to build a room from this seaweed, that one would be able to enter, but it was too complicated. So we created an irregularly shaped sea creature to introduce a wider audience to the features of the material.

It seems the best–known work so far is your graduation project — the Smallest Sauna on Earth, which was also praised in media. How did you come up with the idea?

In the third study year the whole class wanted to travel somewhere together, but no one was eager to take the initiative. So I invited them to Latvia to visit my buddy in countryside who had an old neglected sauna, which we decided to renovate. We were more than ten students, two tutors, a bath master who had knowledge about medicinal plants and two craftsmen who had knowledge of such buildings. As we all finally were able to enjoy the freedom of the countryside, we had a lot of leisure time and didn’t accomplish much — we changed the roof, levelled the floor and cleaned up everything. Nothing big, but that was the beginning of my idea.

Usually everyone has to stay in Eindhoven when working on graduation project, but I wanted to be in Latvia and told the tutors that I will continue to renovate that sauna. I had many thoughts — it wouldn’t be a traditional Latvian sauna as we know it, but more like a play with the very definition of it, its architecture, the use of plants, the ritual… Once a month I flew to Eindhoven to report on my project, but the Academy didn’t accept it.

I had various ideas how to show it, including installations. Still the concept of the Smallest Sauna on Earth partly arose because of my inner protest and spite — if renovation works of an old sauna in the Latvian countryside don’t qualify as a graduation project, I will bring you a sauna so small that it can be put on a table. The tutors liked the idea, both conceptually and visually and in terms of the materials. It basically operates as an air freshener — with herbal tea slowly dripping on hot stones, the Smallest Sauna on Earth emits a meditative atmosphere. I also wanted to portray how fragile the sauna tradition is, but those who are not familiar with it were intrigued. At the Design Week one boy simply sat in front of it for about half an hour. It is a meditative object.

How do you see the future development of the Sauna, do you plan to put it into production?

Dutch Design Week gave the necessary boost. Designboom was first to publish the article about the Smallest Sauna on Earth, followed by other design media and blogs. An agency serving the Lufthansa airline asked if they can put the information about the Sauna in their in–flight magazine for business clients. It was published there alongside some expensive diamond bicycle, and my price was 500 euros. Initially, I had no intention of selling it, it was a one–off thing, but then I started to receive requests from people who wanted to buy the Smallest Sauna on Earth. So I made and sold about 12–13 of them. After that I understood that doing all the work by myself I couldn’t reach the necessary quality. Although I continued to accept the requests, I replied that they have to wait until I message them myself. Now I have found a serious manufacturer here in Latvia that produces various metal objects for export. The stainless steel parts for the Sauna will be produced there and coppered afterwards. Processing stone isn’t a problem in Latvia. I hope that this will bring the result to the next level.

What do you think is the target audience for this object?

The product isn’t cheap, it is something between art and design and is usually chosen for the feeling it provides, not for its functionality. However, if we think about air fresheners that are available on the market — electrical ones with unknown liquid inside… When I moved into an apartment in Jūrmala two years ago, the previous owner had used them and I couldn’t get rid of the aroma for half a year. So far the Smallest Sauna hasn’t been particularly advertised and the sales aren’t big, yet there have been requests from medical institutions, spas. I have thought about going to Japan, because they have similar understanding of aesthetics. In Scandinavia, Germany as well.

Since 2013 you have come up with some very unusual ideas when creating design solutions for the Untamed Dinner gastronomic performances organised by Gundega Skudriņa. It seems that in order to really surprise the attendees, you have to be very open to various experiments yourself. How is it still possible to create something fresh, unprecedented?

All depends on the project, because the concept comes first. For example, the main idea of Design +/- Meal was that each one of us is alone, and only together we can accomplish something. Using it as a motto, the theme «one isn’t an eater» occurred. On one side of the table ten people ate using forks that were welded together, there was also one long napkin on their laps. They had to feed each other, to play checkers. In the beginning, the room could only be entered when many door handles were pressed at the same time. When I see a space, an idea pops into my head, let’s say, to attach stars to the ceiling that come down later, while Gundega suggests that we could also put a dessert in them. Ideas come when you ask questions. I am very pleased that colleagues trust me, even though there have been quite many errors. However, if you don’t fail, you don’t learn either.

Do you have a favourite material?

For a while I was obsessed with a variety of natural materials. In Latvia it is easy because you can achieve a great effect without spending too much money. It wouldn’t be so simple in London, it’s not possible there to go into a forest and cut down a tree. I’m also fascinated by various transparent plastics, latex, foam rubber. In winter we organized a meal in a transparent tent deep in the woods. I wanted a blizzard in it and it turned out that foam plastic is the lightest snow–like material, better than feathers. Each idea has its own material.

You have worked in the fields of graphic design and set design, created various objects and installations… Which form of creative expression do you prefer?

That is a tough question. Clearly I don’t like to spend much time working on the computer. I enjoy the process from the moment when an idea springs into my mind until its implementation. The closer the result is to the original idea, the more professional you are.