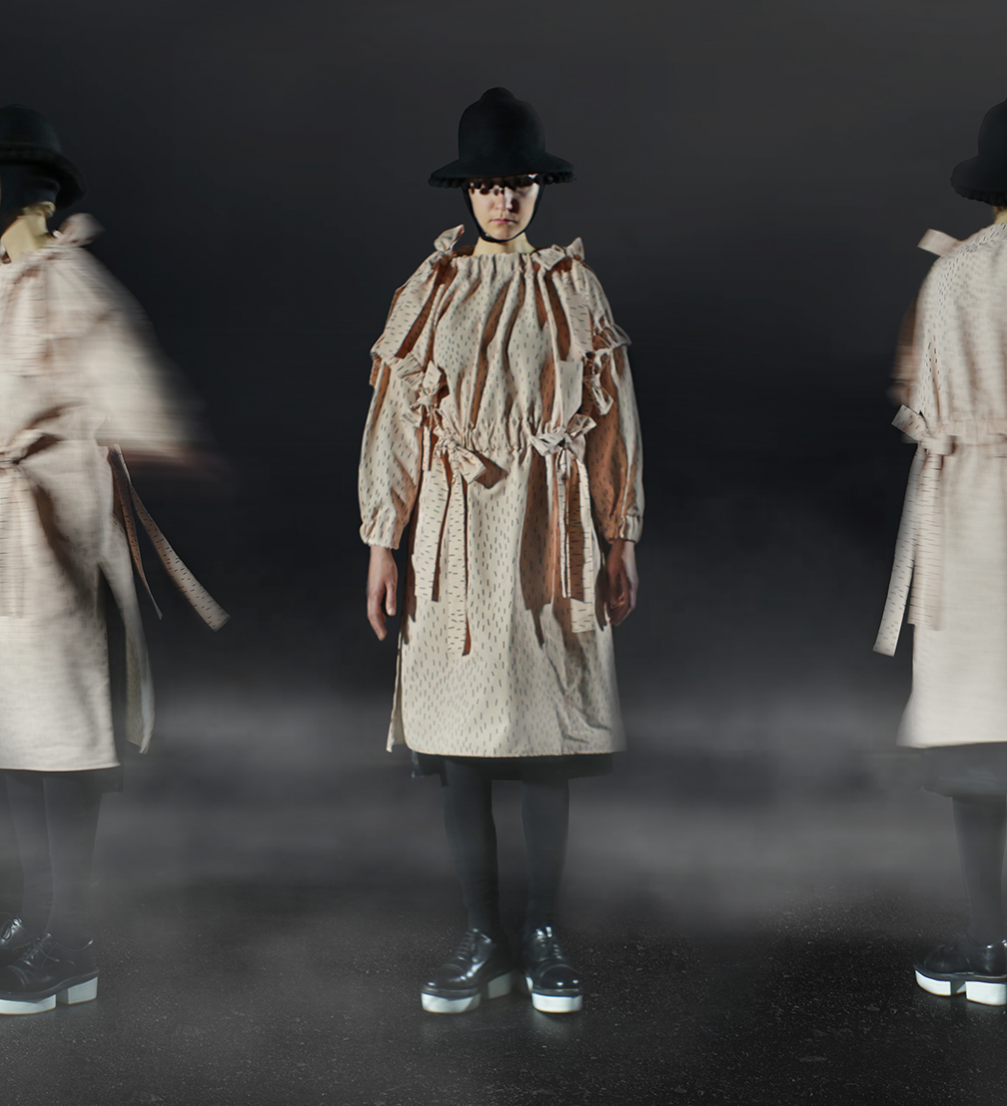 At the end of the Master’s degree program in Fashion Design at the Department of Design at the Art Academy of Latvia Santa Aulmane has created a clothing collection «Oenomel». Its main source of inspiration is a nightgown, and it is transformed with thoughts about the etiquette of clothing and observations of ethical boundaries.

Santa Aulmane’s work for her Master’s thesis, the clothing collection «Oenomel», was inspired by her mother’s story about the wives of Russian officers during the Soviet occupation, who went to the theatre wearing nighties thinking they were evening dresses. Although this story is usually told with sarcastic connotation, it prompted Santa to explore the etiquette of clothing and reflect on ethical boundaries.

«Observing the current tendency to publicly demonstrate more and more exposed bodies in pop culture, I wondered why it would seem normal and acceptable to see hardly covered bodies in music videos, but it would appear awkward, even rude, to appear in a social event in a nightdress that fully covers the body», Santa reflects on whether or not nudity is nowadays more acceptable than simply clothing that is not appropriate for the event. The core element of the collection’s concept is the nightgown from the end of 19th–century, which at that time was worn only in the bedroom, hidden from the eyes of strangers and not mentioned in conversations. It was as an intimate part of a person’s private life as the bed, and it is in the most intimate proximity to the body.

In Santa’s clothing collection «Oenomel» the nightdress symbolises the crossing of personal borders. «Nightgown in bed» has become a «nightgown in society», creating a new image of an anarchist–dreamer, and interpreting healthy breach of etiquette rules. The costumes reveal elements that are characteristic to nightdresses and bedding textiles — certain tones and patterns, free–falling, body–covering shapes, drapes and ribbons. In this collection, Santa continued the use of «patches» that she began applying in the first year of the Master’s program, developing it in a new way and stylizing camouflage application patterns.

The name of the collection «Oenomel», which originates from the Greek language and cannot be translated directly, denotes two opposites, sweet and strong at the same time. This duality, gentle and daring coexistence, shapes the character of the collection.

Santas Aulmane’s Master’s work is supervised by Santa Zariņa, a lecturer at the Art Academy of Latvia.

Currently, Santa Aulmane, who graduated from the Faculty of Architecture and Urban Planning at the Riga Technical University before studying at the Art Academy of Latvia, works at the architect’s firm MARK Arhitekti and is also looking for a niche in fashion. Santa wants to develop a brand concept that values authenticity — returning to manual work, personal approach and uniqueness. Santas’s creative work is characterised by manual fabric processing.