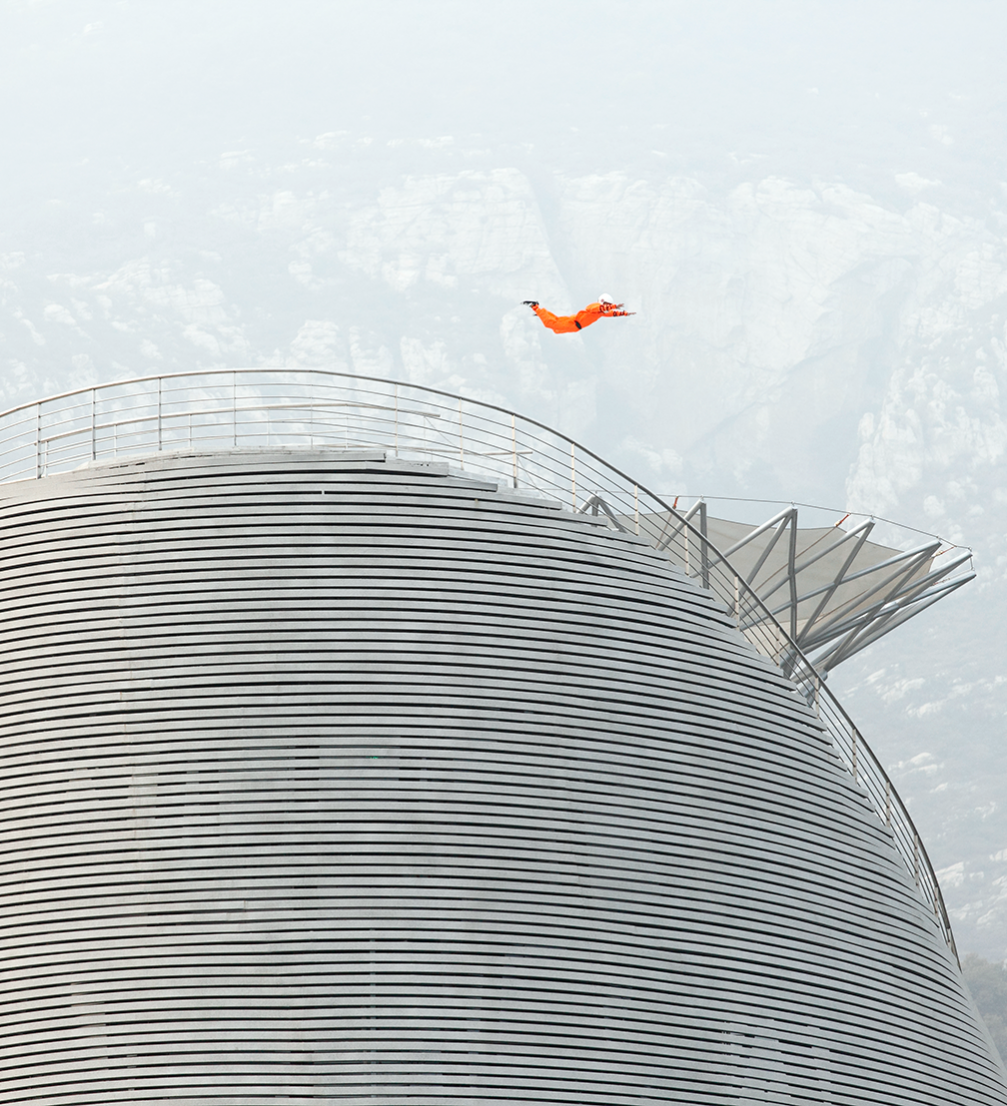 On the hillside of the sacred Songshan Mountain in China, Buddhist monks give levitation performances in an amphitheatre designed by «Mailitis Architects».

Back in 2010, when «Mailitis Architects» together with «Aerodium» successfully realised the Latvian pavilion in the World Expo 2010 in Shanghai, architect Austris Mailītis was approached by a Chinese businessman, interested in constructing something similar in Shaolin. Austris accepted the offer, and six years later the first flying performers took stage in Shaolin.

The Shaolin monastery, Songshan Mountain and the city of Dengfeng in the Henan province of China form a significant spiritual centre — it is considered to be the birthplace of Zen Buddhism and kung fu martial arts. Being rich in its extensive history and significant in its cultural impact, the place has been added to the UNESCO World Heritage list and serves as a popular tourism destination for locals and foreigners alike. Drawing inspiration from the local nature and culture, Austris proposed an open–air amphitheatre whose architectural form unites two symbols — a mountain and a tree. The function of the building is conceptually based in levitation, the secrets of which have been studied by the Shaolin monks for centuries. The performances taking place in the amphitheatre are an interpretation of ancient and contemporary myths of popular culture. The vertical wind tunnel in the symbolic tree makes levitation physically possible and entertaining for the audience sitting on the stepped mountain.

The main users of the Flying Monks Theatre are kung fu students — children as young as three years of age, sent by their parents to kung fu boarding schools near Shaolin monastery. There are over 35 000 kung fu students in the city of Dengfeng. Formally, they are not monks, however, their lifestyle is unusual. The owner of the building, «Henan Ji An Industrial Co», uses the amphitheatre not only as a training place for the kungfu students, but also for aerodynamic levitation performances and a place of entertainment for anyone willing to try flying. The performers are acrobats trained by «Aerodium», professional dancers, kungfu masters and students. The viewers of the performances are local youth, kungfu students, Chinese and foreign tourists.

The building method combines modern and ancient Chinese technologies — laser–cut steel superstructure supports stone steps handcrafted using local quarry resources. The building has four basic functional zones: a stepped exterior surface, the stage with the wind tunnel, interior area with spaces for performers and visitors, and the engine room. The stair surface, apart from its usual purpose, is designed to continue the topography of the territory, to adjust natural lighting for interior and to provide a massive air flow for the engines. Inside the vertical wind tunnel, the air flow reaches a speed of 200 km/h, generated by powerful engines with ventilators and a system for operating and controlling these engines. Design of the engine room with silencers, the wind tunnel and other functional zones was developed in close collaboration with «Aerodium».

When asked about the experience of designing a structure and supervising the construction process in China, Austris admits that «the cultural differences are significant, and that includes work culture. To be able to collaborate, we had to learn to work the Chinese way. We had to accept a different understanding of things, for example, what is the truth? How do we measure time? Architectural drawings proved to be a universal language that helped to get along with people with whom we couldn’t communicate verbally. The building quality is lower in China. We had to fight to improve it within the available possibilities. We had to consider differences in climate, the distance and time difference as well.»

A film about the design and construction process of the Shaolin Flying Monks Theatre by «VFS Films» is currently in production. The premiere is expected around the end of 2017.