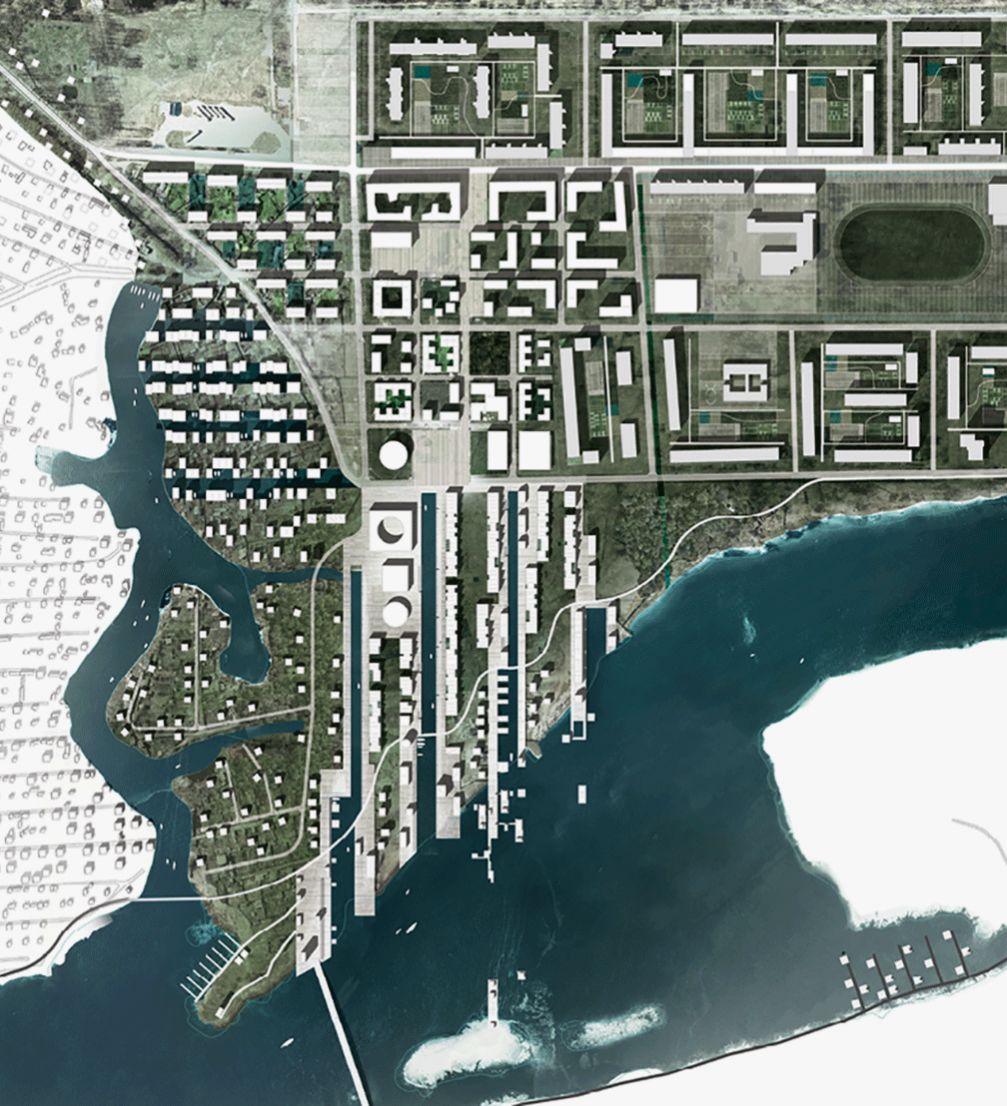 At the graduation show «100% sale» of Riga Technical University Faculty of Architecture and Urban Planning our attention was caught by the work of two young architects Līva Nordmane and Mārtiņš Rusiņš. In their proposal for the Daugavgrīva neighbourhood in Riga they have put forward a logical and thorough urban strategy and architectural designs that are both fresh and non-pretentious. Their project stands out with a tasteful and elaborate graphic representation as well.

In the preface of the project’s concept Līva Nordmane and Mārtiņš Rusiņš state that Daugavgrīva today is a forgotten outskirt, although historically it is where the whole city began. The neighbourhood can be proud of its unique natural assets and cultural heritage, which could form a basis for a high quality living environment, but all this potential has been neglected until now. The young architects remind that it is not rational to allow the city to spread, when there is a possibility to intensify parts of it, combine urban and rural qualities, offering people to live in an urban environment where one can enjoy the full range of ecosystem’s services.

Aim of the project is to attract human resources and to engage Daugavgrīva in the city’s life once again, turning it into a tasteful alternative to the resort lifestyle of Jūrmala. To develop Daugavgrīva as an attractive and independent destination for visitors, the Daugavgrīva fortress could become a starting point in the chain of the neighbourhood’s activities. Its programme could offer cultural and musical events of a larger scale. The project also proposes to build a passenger terminal at the currently underused part of the winter harbour, by that refuelling water traffic.

Līva and Mārtiņš worked together on the urban strategy for Daugavgrīva, and afterwards each of them developed their own masterplan and architectural design. Mārtiņš stayed on the part of land protected by dams, while Līva turned to the flooding waterfront by Buļļupe river. Both graduation projects were supervised by architect Egons Bērziņš.

Līva Nordmane’s project is a development strategy for flooding meadows, where fluctuating water levels are perceived as an integral part of the environment, but architecture — as a natural addition to it. Various guidelines are proposed according to the risk of flooding in each particular position. The area is planned as a mixed use zone with public and residential buildings, many of which are floating single–family houses that could be used all year round. The main idea of the project is to create an urban transect between allotments in Mamme meadows and the mass housing estate, with water serving as the main binding element in the disintegrated cityscape.

Mārtiņš Rusiņš worked with Daugavgrīva’s mass housing blocks, trying to define the formless urban space and creating a clear distinction between public and private spaces. Blocks near the main road have been completed with a new urban front which accommodates a public function on the ground floor. On the courtyard side, gardens have been added to ground floor apartments, a rain water management system with wetlands and water storage pools has been planned; greenhouses, car parking with space for various sports activities on the roof, as well as common spaces have been placed in the middle.

Block housing of series Nº318 or the Khrushchovka has been transformed by merging flats on the 4th and 5th floor into two–storey apartments with spacious terraces. The constructive scheme makes use of the modification possibilities of the longitudinal load–bearing walls. A new freestanding and open facade construction has been added to series Nº103, providing each apartment a balcony.

Līva Nordmane is planning to continue studies at master’s level with a focus on flooding and waterfronts. Mārtiņš Rusiņš works at the architects office «NRJA». They collaborate on different architectural projects.