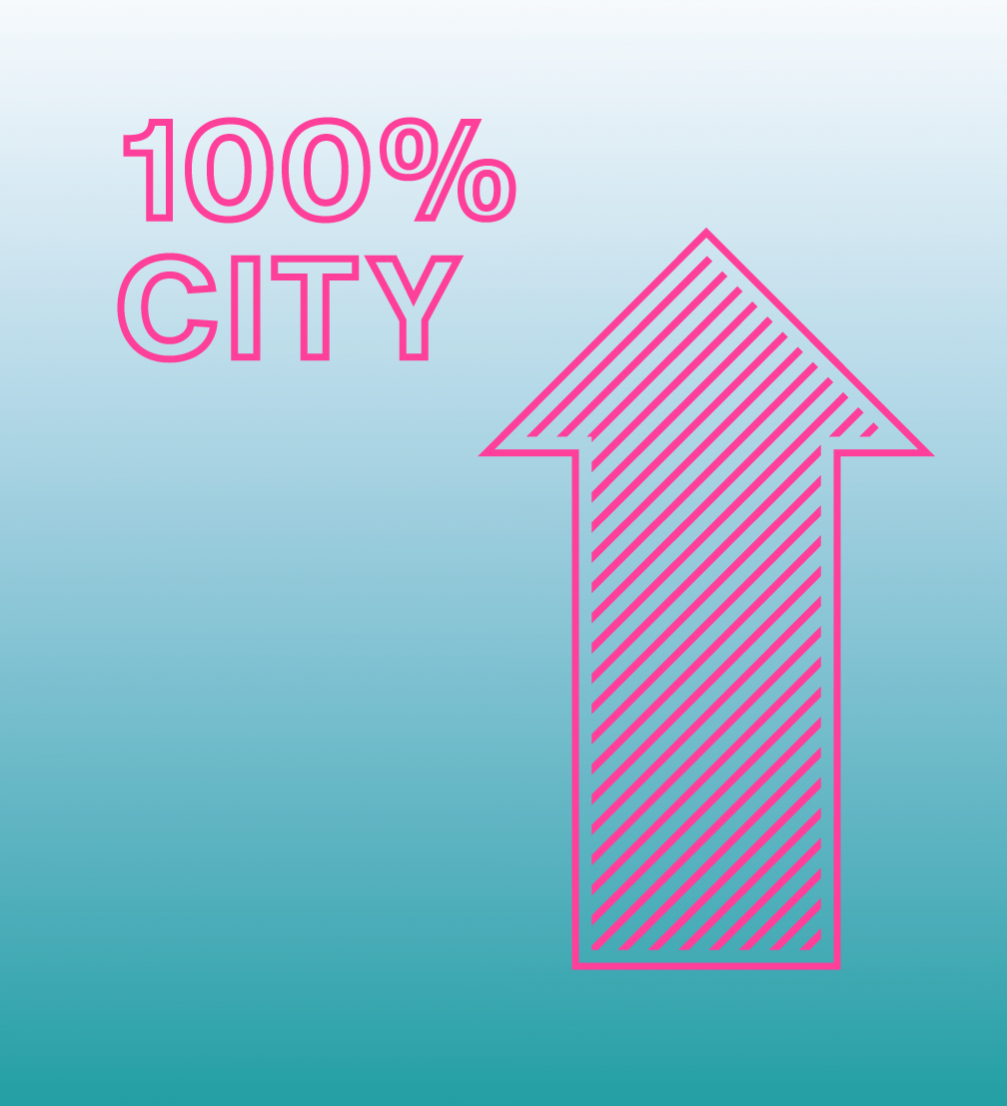 On December 5–6, an International Forum 100% CITY on various forms of active city making will take place at the Ģertrūdes Street Theatre in Riga. Urban researchers and designers, architects, artists, sociologists, activists and theoreticians will discuss visions, strategies and practices that include everyone in living, seeing and making a good and balanced city.

100% CITY will showcase both one–off activities and long–term processes aimed at changing attitudes towards public spaces and urban lifestyles, debate about the clash, coexistence and interaction of local and global phenomena, as well as the relationship of the city and art.

During the Forum, two main approaches to active and participatory city making will be discussed: the «constructive one» represented by urban planners, architects, and politicians who come up with long–term plans and try to implement them according to regulations, and the «destructive one» when artists, activists, communities change the city and make a change by destroying the established order of things by sudden, unexpected, radical and unsolicited actions and interventions.

Matthew Passmore is an artist, teacher and pioneering public space advocate, one of the founders of the Rebar Art and Design Studio and initiator of the PARK(ing) Day global movement. Matthew’s recent projects include PARKcycle, the world’s first pedal–powered public park, and the Latham Square Pilot Project in Oakland. In 2014, Matthew founded MoreLab, a creative endeavour focused specifically on developing innovative public art, museum exhibitions and public spaces. In the Forum’s keynote Matthew will talk about the social, spatial and political implications of active public space making tactics.

10.45–13.00 (including a coffee break)
Visionary and real practices of making a good city

Marten Kaevats is an architect and city planner who studies the impact of various scalable technologies on the spatial behaviour of individuals and communities. Marten is an active member of several civil society organisations, one of the founding members of the Uue Maailma Selts (New World Society), and he has contributed to the creation of freeware community web platform Community Tools, established in 2008. Recently he was chosen to be the curator of Tallinn Architecture Biennale 2015, themed Self–driven city.

Evelina Ozola has worked as an architect and urban designer at MADE arhitekti in Riga and SVESMI in Rotterdam. Next to design work, Evelina writes about architecture, cities and creative industries for online and printed media, and she is a co–founder and editor of FOLD. Architect and urbanist Toms Kokins has established himself as a defender of public space and bicycle culture in Latvia. He has recently completed the Cycling Transport Development Strategy for Riga. Evelina is a lecturer at RISEBA Faculty of Architecture and Design, while Toms lectures at Riga Technical University.
Together Evelīna and Toms organise the annual Riga Technical University International Summer School and work on urban design projects as Fine Young Urbanists.

Ania Molenda is an independent researcher and curator. Her work to date has spanned academia, an experimental think–tank (The Why Factory, TU Delft) and the architectural practice (MVRDV, Powerhouse Company, SVESMI). She is interested in cross–fertilisation between spatial practices with other disciplines and the role openness and communication play in spatial, cultural and technological realms. Cristina Ampatzidou is an independent researcher and writer who investigates the potential of new media for city making and the changing roles of professional designers, policy makers and citizens in that process. Among others, she has collaborated with. Cristina is currently a PhD student at Groningen University, having previously collaborated with Play the City! foundation and the Architecture Film Festival Rotterdam. Ania and Cristina have recently established a web platform Amateur Cities that critically examines alternative ways of city making. In the Forum, they will speak about the need of thinkers and makers finding a common language in city making.

Motus, a theatre company founded in Italy in 1991, independently produces shows and space–specific happenings that blend theatre, dance, video, visual art and poetry, sharply reacting to current events and highlighting the contradictions of today’s world. For Motus there are no borders, no frontiers between countries or eras or disciplines, and no separation between art and involvement in society. Enrico and Daniela often draw inspiration from political and social events related to urban culture, and leave the stage to dive into the city in a search for new material and to perform in the streets. Their presentation Inside / Outside will reveal the role of the city in the shows and actions of Motus.

Matjaž Uršič is a researcher at the University of Ljubljana, Faculty of Social Sciences, a member of the Centre for Spatial Sociology. His research interests focus on the processes of socio–cultural transformation of cities and contemporary urban phenomena in the circumstances of globalisation. In his lecture Matjaž will analyse the relationship of public art and urban space from the perspective of various city users.

Culture theoretician and curator Kaspars Vanags will give an overview of various artistic intervention practices in public space.

António Brito Guterres has studied urbanism and social work, and the social and cultural impacts of rehousing policies. He has lead several social, artistic and cultural initiatives in the Vale da Amoreira district in Lisbon, and has been working as a freelancer and volunteer with grassroots organisations and informal groups in neighbourhoods all around Lisbon. Currently he works for the Aga Khan Foundation Portugal with issues such as participation, governance, education, youngsters, diversity and pluralism. Antonio is a member of the International Network for Urban Research and Action.

Bani Brusadin is a freelance producer and researcher in the troubled water where art, digital technologies, popular cultures and politics clash. In the last decade he has been involved in several art, activist and research projects, exploring the power of fake, improper identities and new forms of subcultural epics. In 2004 he co–founded The Influencers, a small cult festival in Barcelona about unconventional forms of art and communication.

Torre Galfa is a high–rise from the 1950s that stands in the middle of Milan. On May 5, 2012 the building, which had been standing empty since 1997, was taken over by the Macao movement, with thousands of people participating. It was only one of several occupations in Italy that year when activists reclaimed physical spaces for artistic and cultural expression, react to the heavy budget cuts on cultural activities and protest against a neo–liberal city development that only a small circle of people benefit from, excluding the majority. Luca Chiaudano is a film maker and activist, who has been part of Macao movement since its beginning.

John Jordan is a co–founder of The Laboratory of Insurrectionary Imagination (Lab of ii) that merges art and life, creativity and resistance, proposition and opposition. Known for recruiting a rebel clown army, running courses in post–capitalist culture, initiating global action Reclaim the Streets, throwing snowballs at bankers, turning hundreds of abandoned bikes into machines of disobedience and launching a rebel raft regatta to shut down a coal fired power station. He treats insurrection as an art and art as a means of preparing for the coming insurrection.

The International Forum 100% CITY will take place on December 5–6 at the Ģertrūdes Street Theatre in Riga, Ģertrūdes iela 101a. Working language of the event is English, and entrance is free. Please register your attendance until December 4 by sending a message to the e–mail address gundega@theatre.lv.

The Forum is organised by the New Theatre Institute of Latvia in collaboration with the international project Global City – Local City and platform for creative industries in Latvia FOLD. The Forum is part of Riga — European Capital of Culture 2014 programme, and it is supported by the EU programme Culture, State Culture Capital Foundation, Ministry of Culture and Ministry of Economics.