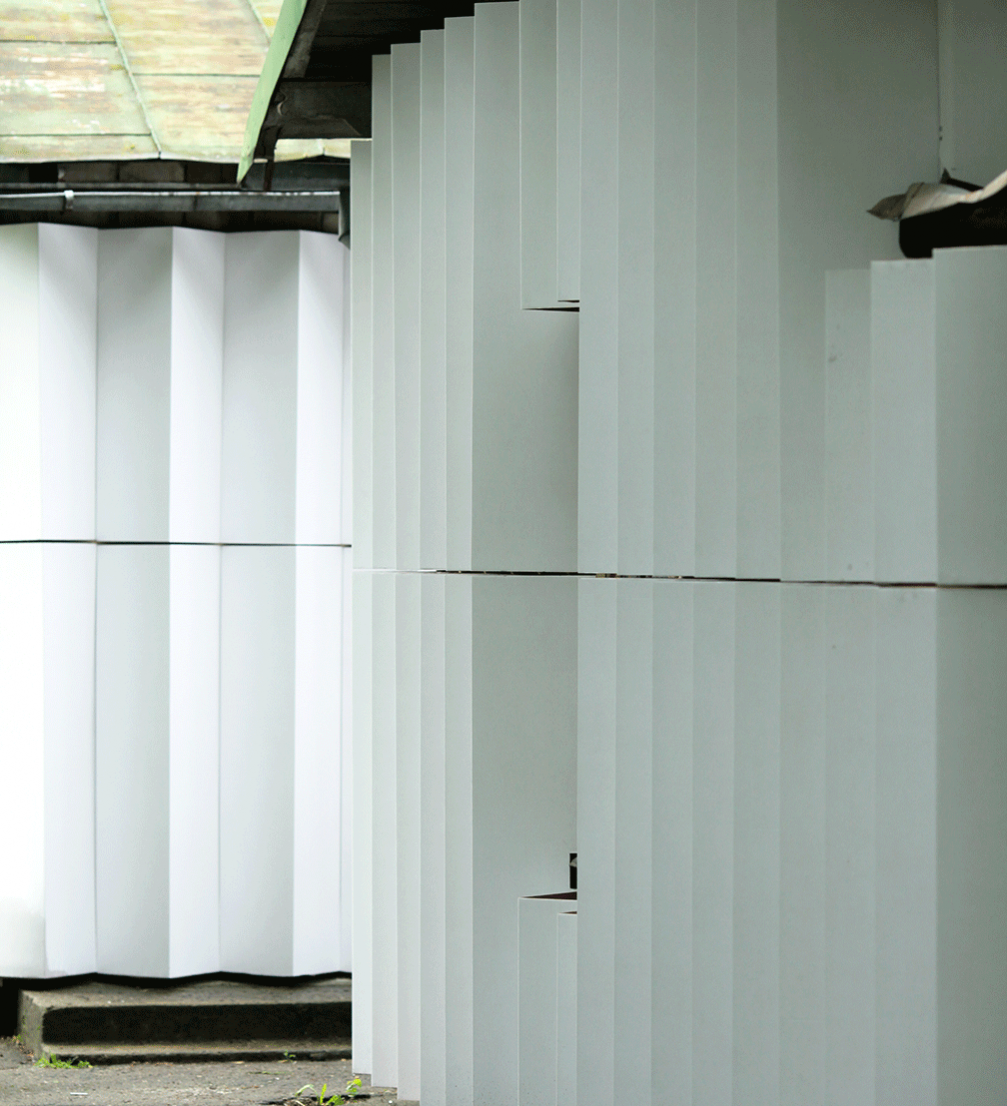 Paper Object Festival has brought to Riga not only a new appreciation of paper but also the Japanese architect Tomomi Hayashi from the Talinn–based studio «HGA». By creating a paper installation for the long forgotten «Sparrow» library nearby Kalnciema Quarter, Tomomi strengthens the position of architecture as a positive intervention.

Modern European society sees paper mostly as a practical material without a profound meaning. Why does it have such a high aesthetic, philosophic and emotional value in Japanese culture?

In Japanese we call paper «kami», but the word also holds another meaning — «god». When you go to a Shinto shrine, you see a white paper hung at the entrance gate, which symbolises the gods. So we have a specific association coming from the sound of the word. In the Shinto religion the white colour symbolises purity and the whole initial process of visiting the shrine starts from purifying yourself. Maybe we don’t recall this message every day, but once you see a white paper hung at the Shinto sanctuary, you’re aware of its sacred purpose.

Do you see the use of paper in architecture differently as well? How does it reflect in your work as an architect?

In traditional Japanese architecture paper is used as a screen or a window, sometimes as a wallpaper to cover a surface, such as the «washi» paper in tea houses. This is one of the most visible differences from European architecture. Japanese architect Shigeru Ban uses paper as a construction material in the most advanced way. He has made a lot of buildings for disaster victims out of paper tubes which can hold a lot of weight. Unfortunately I haven’t used paper in architecture in such a large–scale project.

What is the Japanese sense of space and how to characterise that?

There is a special concept called «Ma», which signifies space, but we also use it to express time and relationship between objects and people. It is a philosophical distance, a room and a relationship of how far or close something is set relatively to another thing. And it’s useful for architects, because it suggests both time and space in one word. Japanese architecture is characterised by a flexible use of space. We use one room for many different purposes and transform it according to the time of the day or seasonal changes, and such thinking is valuable in our culture.

You have been working in Tallinn for more than 10 years now, have you noticed a difference between the Japanese and the Estonian perception of space?

For the reason that the Estonian language has the name «ruum», I discovered that they understand our spatial concept better than the Americans. It’s hard to translate the Japanese «Ma» into English, because this English word «space» is without a meaning in itself, but the Japanese see «Ma» as a space comprised within something. So in this sense I feel that I can share a similar ideology with Estonians.

Here the surroundings with their historical layers are so visible. In Japan most of the houses to the utmost are 50 years old because of the natural disasters or air raid of the World War II, so the scenery is constantly changing, but here it is so stable. In Japan they are restoring just some specific objects — temples, shrines, buildings of historical significance, but not preserving the whole streetscape or town. In the Baltics wooden house areas are treated as an environment, so it’s softly protected. This way we can preserve the traditional atmosphere as it was, at the same time regenerating it but keeping it wholesome.

What do you think about temporary installations — what is their importance and place in architecture?

It can take several years before you see your result in architecture, but temporary installations give a quicker outcome and you can intervene in the public space where it isn’t usually allowed with architecture. We can take advantage of this aspect of temporary and site specific installation, because it’s a good learning method — you experiment, learn how to read context, make an intervention and see how the people react.

Tell us more about your work at the festival — why did you choose to make an installation for a library?

While walking around the neighbourhood I found this lonely and sad–looking building on the top of the hill behind trees. It was a bit strange to find this brick house among the wooden architecture. There was some kind of a social mission in it and I had to do something. This architecture installation isn’t just about making something beautiful, but to raise social awareness, and put a light on the help and renovation the building needs. The library is called «Sparrow», so maybe we can help this bird fly again.

How did you come up with such design, encasing the building in paper?

By using paper I wanted to represent what’s already inside the building — the books. My inspiration was origami, so I folded the paper, and that gave strength to the element; when it’s sunny the play of light creates nice shadows and gives depth to the building. I used white laminated double–sided cardboard so it would last through the rain and screwed it onto a wooden frame because of the unevenness of the surface of the facade. I got to know that this house was build at the end of 19th century as a wooden summer house and in the 1960s it was converted into a library adding the bricks to the facade. I find it a beautiful coincidence that now the building has three layers of time — wood, brick and paper.