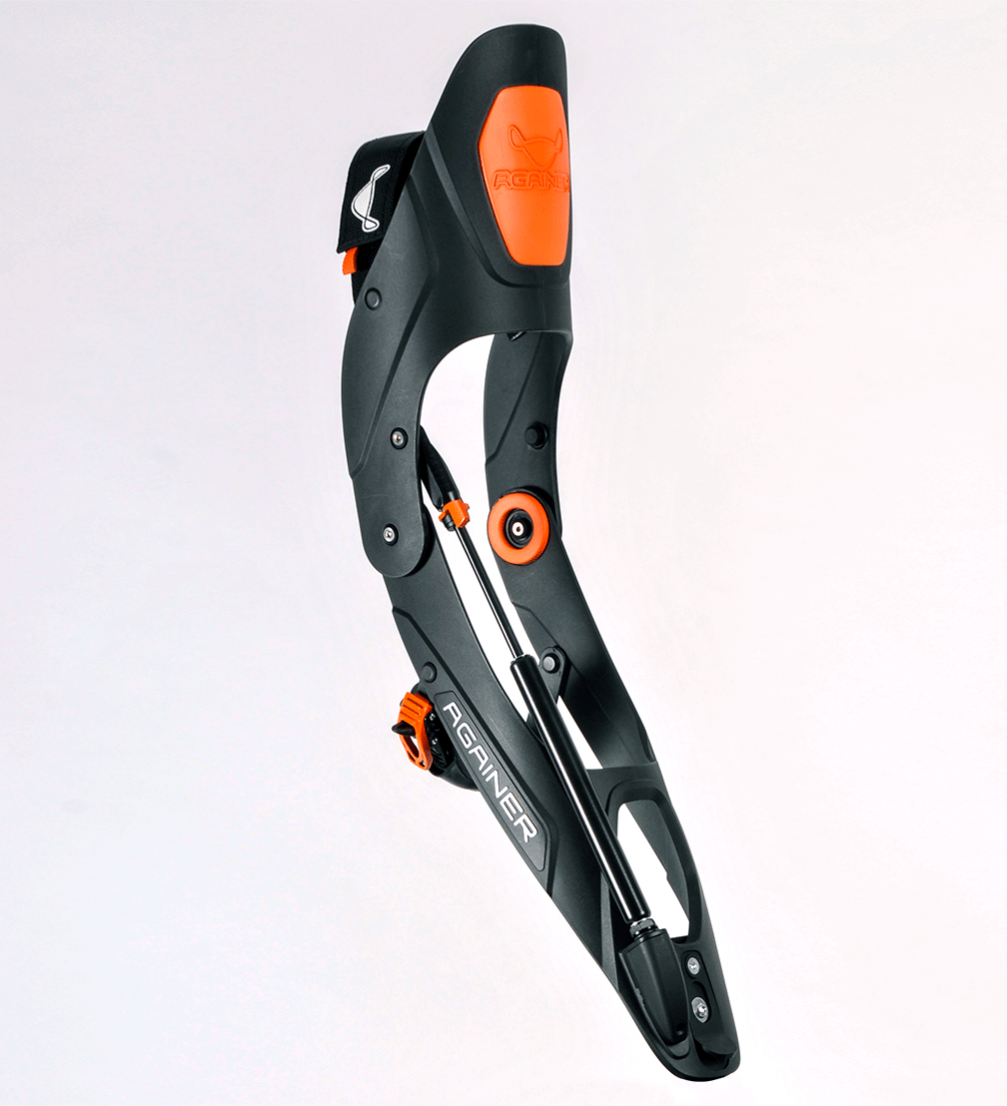 Rarely is that we hear about innovative sports gear made in Latvia, but one of this year’s Design Awards was given a previously unheard of skiing enhancement tool «Againer». They are leg–mounted clamps that allow for a longer skiing experience, and also help athletes to be back after an injury, because they take strain off knees, reduce muscle tension and back pain. Valdis Valeika, the head of business development at the «Againer» team, tells us about the long road to the final result and the persistent progress in the foreign arena of sport.

Those who ski know of the smarting pain which, after a few longer rides, appears in muscles which are not yet used to the load. For many willing to ski various knee injuries are an obstacle. «Againer» clamps solve these problems by reducing the pressure on knees for as much as 60 per cent. A set of orange–and–black gear includes embracing polyamide frames, adjustable shock absorbers, and several bindings. It can be worn both above and under skiing trousers. The essence is encoded in the very title of «Againer» — to be able to ride down the hill again and again.

From idea to product in ten years

Initially, the idea about a skiing enhancing tool came to an engineer Aleksandrs Smertjevs, when the injuries, gotten during the motorcycling career, would not allow him to dedicate himself to skiing as passionately as he used to. Being an enthusiastic inventor, the first prototypes Aleksandrs made were from steel piping in his garage. One day Jānis Valeika and Valdis Valeika, Aleksandrs’s now-teammates, came to repair a motorcycle engine and saw the potential behind the invention. «We thought it would be interesting to commercialize the project, so that it could become available to a wider audience. When we had already built some five prototypes, we saw how serious the whole business had become and decided to develop the gadget further — we were going to make it out of plastic and were thinking about branding, marketing, packaging, instructions — everything that a sports gear needs,» remembers Valdis Valeika.

When after several attempts at creating a prototype it was understood that plastic is the material which is going to be the perfect combination of functionality and comfort, they made 3D mock–ups of parts and began prototyping with an FDM printer in order to get a tangible design example. In Latvia, it could be done in just one place — in Latgale Engineering Centre of Technology in Rēzekne. Here, the firm has also applied for a business incubator «Ideju viesnīca» («Hotel for Ideas»), where they have acquired an office space, mentoring and bookkeeping services, a legal address, and everything else that helps starting a business.

During the years they have built fifteen prototypes, but a more intensive work has been carried out for the last seven years. The first functional steel prototype weighed 4 kilos, while the one made now out of plastic just 1.4 kilos.

Parts for «Againer» are manufactured using metal press–moulds, in which hot plastic is filled under high pressure, where it then takes its shape. Due to the necessary precision and the small manufacturing amount, it wasn’t possible to find a manufacturer in Latvia, so currently the plastic parts are made in Finland and are then assembled in a workshop in Riga. «Againer» has more than five local sub–contractors: all the small rivets, shock absorbers’ switches, bags, printed instructions, packaging and spray–painting is done here, in Latvia. «Yes, it is important for us that everything is made in Latvia, but it can happen only if the people have the necessary knowledge, and they know what they are doing,» says Valdis.

The mould–manufacturing is a technologically complicated and expensive process, for which the business incubator helped get funding from the EU. However, it is just a small part of what is invested in the project — at the moment, the work is funded by a local business angel whose name Valdis wants to keep in secret. In addition to that, new financial opportunities are being sought for future development.

«It’s not easy to find local experts who could design and develop technology for such a tool. One thing is to draw it on paper, something different is to be able to design it so that it then works as intended. In Latvia, to create products outside the limits carpentry, standard metalwork, electronics and pharmaceuticals is very, very difficult,» Valdis believes. The company «In4Design» has been assigned to carry out the designing process, with designers Svyatoslav Aleinikov and Artyom Bugo, while the technical aspects are dealt with by engineers Aleksandrs Smertjevs and Jānis Valeika. They have also consulted with sports doctors, physiotherapists, experts in orthopaedics and protecting gear; besides, the team was joined by Andris Dieviņš, whose education is in the field of sports medicine. Andris is also an experienced business coach who has always helped the team with his energy and vigour.

The name «Againer» was coined together with the communication agency «Larsoni», choosing from some 200 options while developing the brand. Advised by the agency’s director Normunds Baķis, they chose «Againer», which stands for returning to the track again and again, and which has a good connotation in English. It was clear that they must think properly about proper packaging and comprehensive instruction manuals in four languages, in creating which professional graphic designers and translators were involved. The necessary sales equipment was designed by Jānis Kārkliņš, a tutor at the Latvian Academy of Art, while his son, Pēteris Kārkliņš, developed various promotional materials.

In the top Austrian resorts

Although «Againer» is just beginning its first winter season, the gear can already be found in twenty Austrian skiing resorts. As the first market for export, Austria wasn’t an accidental choice: «They really have a lot of skiing resorts, and expenses are on a reasonable level. Other countries have their peculiarities — Switzerland has a high import tax, in Italy, dealers are not that reliable, while in France, they are not eager to speak a foreign language. The company had already had personal contacts and previous experience with Austria,» Valdis lists the reasons.

A ready–for–sale model was created this spring, and soon after that the first samples were shipped to Austrian vendors. «We realized that we needed a very precise training for dealers — all the details must be explained and then tried out on the track, otherwise there won’t be any sales. «Againer» is a typical try–and–buy product. When they hear about «Againer» for the first time, vendors are perplexed because it is something completely new, and it is hard for people to imagine how it works,» Valdis explains. In Latvia, at the moment, just a few people know about the tool. The team doesn’t refuse to provide local sport stores and rentals, however, it has chosen a different strategy for now — first, to conquer the European sports market, because «when it goes well there, it will go well in Latvia, too».

The «Againer» team chooses to participate in small scale sports gear exhibitions, like ÖSFA in Salzburg, where it is possible to establish direct contacts with retailers. The ISPO fair, where the grands of the sports industry gather, is still too big and expensive for «Againer». Valdis adds: «At the moment, we are dealing with the distribution of «Againer» ourselves, because we can’t afford a distributing partner now. We also know that at this stage no one can explain better than us how the product works.» Several European skiing magazines have responded to the idea and applied for a trial, because there are few radically new products appearing in the trade.

As yet, the company has no competition — Valdis knows of a company of similar size in England which has also turned to developing a similar tool, but it differs from that of «Againer». They have noted a couple inventors whose prototypes are on a level where «Againer» was seven years ago. At the same time, the fact that there isn’t yet a market for such a product becomes an obstacle — if people are not aware of such gadget, there is no demand.

The strategy for protecting the product is registering a technical patent, a design prototype and a trade mark. The technical patent prevents other companies from manufacturing and selling a product of this type, while the design prototype and the trademark protect «Againer» against copying. Since «Againer» is not a medical tool or a protective gear, it does not require a special certificate.

Retail price of an «Againer» set of gear in Europe is 799 euros. The expenses include research, development, trial, manufacturing, delivery, marketing, sales, insurance, and administration; there also must be a place left for profit. This winter, the «Againer» team has decided to dedicate themselves to conquering Europe and beginning their way into the US market of winter sports gear; but next spring they hope to sign new contracts for further commissions and find additional investment for a cycle of summer manufacturing. In the meantime, new potential dealers are sought and product’s improvements are planned. The faith in «Againer» is strengthened by the knowledge combined in the team from different fields, as well as an obviously strong wish to do everything properly — from a switch in the shock absorbing mechanism to the drawings in the instruction manual.