Impossible not to think. Interview with Jānis Straupe 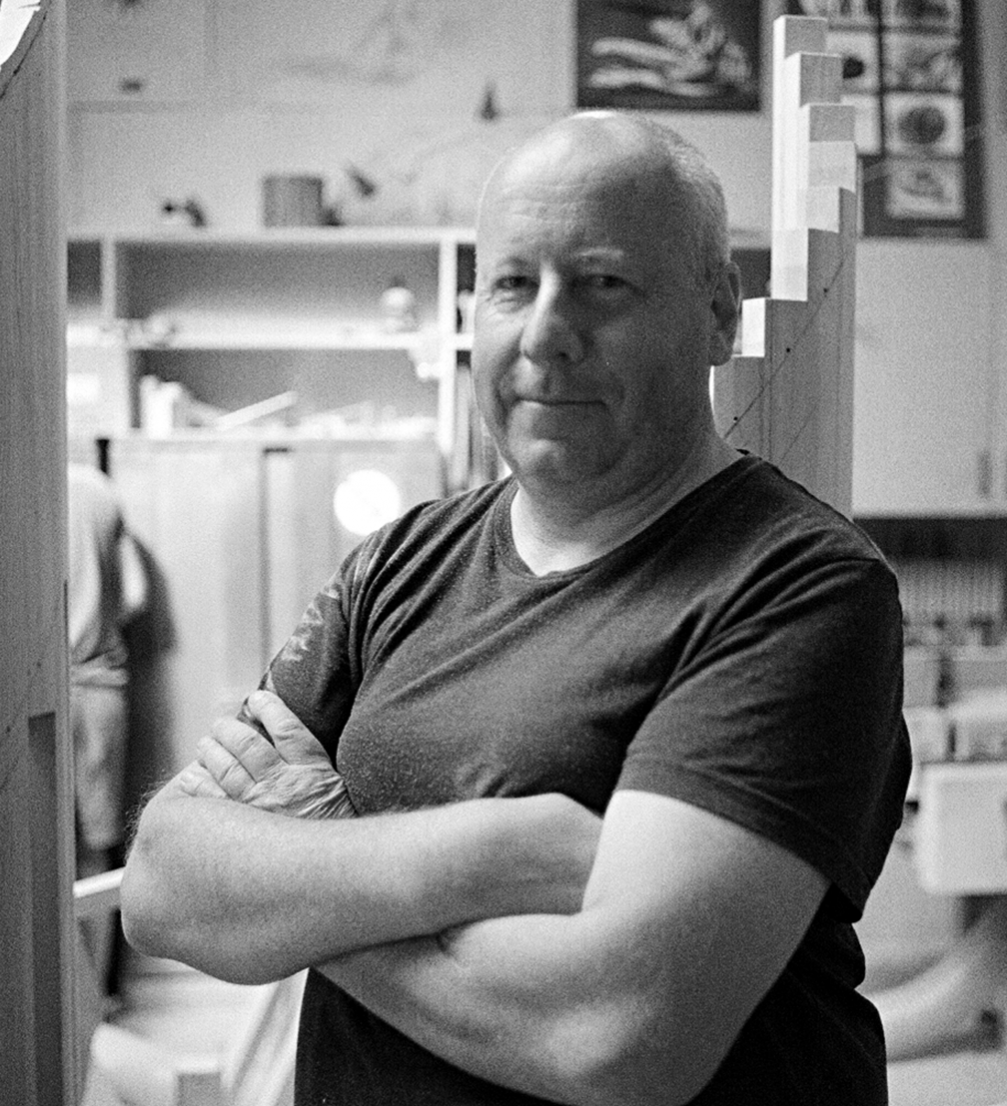 Jānis Straupe’s objects can make us rethink everything we know about furniture design. Among his works is «Chair in Chair», «Double Table» with a tilted surface, «Sharp Chair», which is included in the collection of the Museum of Decorative Arts and Design, and the internationally recognized cabinet «Beetle». For the master himself the biggest joy is a chance to challenge — his colleagues and gravitation. Jānis Straupe solo exhibition «Sinker, Runner and Hindenburg» is open at the Historical Complex of Sigulda Castle until June 23.

The great woodworker’s workshop in Vecmīlgrāvis is where he does two types of projects: one is exclusive commissions, furniture and interior objects; the other is his personal creative pursuits: installations, tables, chairs, chests of drawers, etc., inspired by surrealism and made with the precision of a mathematician. During our conversation Straupe recalls what he once heard from restorers: medieval craftsmen believed God saw everything, including the inside of every work, so it also had to be done with care. This sort of perfectionism is what describes Straupe’s work, but what drives him is his own maximalism.

In interviews and descriptions of your works you are sometimes called an artist or a designer or a woodworker. Which name seems most appropriate to you?

These names do no good. Once I went to a museum in Rūjiena and the guide asked everyone what their professions were. I said I was an artist, to which she said, yes, yes, everyone’s an artist in Riga! I am not a woodcarver who carves ornaments. Rather, I am a wood sculptor, but this is also not how I think about myself, because it is associated with elves and gnomes in the Tērvete park, and I am not doing this. At the same time, the word designer is so widely used. We could stay with the artist.

How did you choose wood as your material?

It was strange. I tried to get into the School of Applied Arts, but got right below the line. In order not to lose a year I was offered to go to the sculpturing and woodcarving department. I did and after four years I was preparing for the entry exams in the Academy of Art to study painting. I studied under Ivars Poikāns. I still had a month until the exams, so I got a job at the «Māksla» art factory and it was where I later did my graduation work — lathed dishes. And stayed there for 15 years, unexpectedly. I graduated from the school of life, not the academy.

Do your craftsmanship skills come from the experience at the School of Applied Arts?

The time when Imants Žūriņš used to teach there was my biggest luck in life. School laid foundations for all my knowledge and skills. There was harmony of grey and earth tones, clarity of form, pedantic accuracy. The great Finnish designers, especially Alvar Aalto, were highly respected. Then I went to «Māksla» factory, which was where the cream of the Artists’ Union would gather, and I understood I wanted to prove myself. I was an apprentice, and the masters would test me: they would send me for vodka, make me unload wooden planks; the first six months I would be making little boxes. But I was so eager to show myself that I didn’t even notice it until I was knee–deep in it all. I was excited. I still am. My skills are my advantage. I have commissioned others to do my prototypes; I explained every detail, and yet others couldn’t make it the way I wanted it.

Are you still passing on your craft? Do you have apprentices?

I have students from the Riga Art and media school; sometimes they make their final projects here. I sit on their juries. I’ve come to realize I can’t hire an experienced professional. It doesn’t work, because they are stubborn and rigid. To hire people with just the basic knowledge, I can shape them and in five years have something out of it.

I work with one old master, Ivars Krūmiņš, with whom we’ve been together a long time. Each morning we begin with pretty nasty arguments. If they heard us they’d think it’s the last time we work together, but this is how we decide on the technique. Everything is thought through to a detail. The craft is where it all begins. One can’t afford to think only about form; you have to know details, so that a chair that you make lasts. My other advantage — or is it the other way round? — is that I only work with wood. I said it already twenty years ago when I first opened my workshop.

Over the years, haven’t you had any urge to change something, use a different material, find a new trade?

I use other materials as much as the particular project calls for. I have a passion, which is painting, but it’s a different story. One can paint anything, but it’s different with wood. However, when I make my wooden objects, I almost see them as paintings. When the interior designer Viesturs Vilks came to me with another crazy drawing of his, we would have a conversation like this: «Again you’ve drawn something that’s impossible to build», to which he replied: «I can’t draw anything you can’t build.» Of course I like praise, but mostly because I like challenging my fellows. When a colleague of mine, a skilled professional, can’t figure out how I did something, it is the best feeling!

When you work on commissioned project, how do you find a balance between your personal standards and taste and the customer’s desires?

My work with the customer involves educating him. I try to explain my point of view to the customer. I say, okay, I can do this and you’ll like it, but then you’ll have some architect friends over and you’ll tell them Straupe made this piece of crap for you. It’s not fair. I have great experience with this and if I feel we won’t be able to come to a mutual agreement, money will not play a big role here. The big role is whether the work is interesting.

With any commission — sometimes even without the customer knowing it — I add something to the work. Once we were building a kitchen set with a massive table and chairs. I said we’d sort the handles out later. I had this idea that the door of the cabinet should fold away like a sheet of paper. The fact that I could realize the idea brought joy to my heart. An already–agreed budget is no obstacle to me.

How do you see the general situation of craftsmanship in Latvia?

I think my trade is fine. Aldis Circenis and Jānis Rauza keep the standards very high; everything’s been perfected; we are no backwater. Speaking of smaller workshops, I am more critical. There are those who build houses to the riches of Jūrmala, but often there is one problem: their work contributes little to art. They just copy and paste from magazines instead of thinking what is best for the particular thing.

The «Beetle» cabinet has been especially praised, but I read the idea behind it was born long ago. How did it happen?

I drew the «Beetle» more than ten years ago when it was an unrealized sketch for an exhibition. Later there was a person who wanted to work with me and partially fund me to make it. He said it was a cool idea and gave me money; that was all I needed. At first I was sure it could be done, but then I made a model and my confidence deflated.

I was very angry. Because to make a sculpture is not simple, but to make an object that functions as a cabinet — that involved some trailblazing. I wanted the doors to open like a beetle opens its wings — like the doors of a Ferrari. But it all went nowhere and in the end nothing opened at all.

It takes great concentration; AutoCAD is of no help; I must make a 1:1 drawing; each item has to be made in clay. It sometimes takes up to a year to go from an idea to starting work, but when I begin the meter starts rolling. The process mustn’t drag on because it costs money and the workshop has to be earning. The «Beetle» took three months; it was a very intensive but interesting process. Initially we made the top part; we hired a woodcarver, but then the door wouldn’t open. I sawed it to pieces. Next morning we started from scratch. This merciless perfectionism sets in. I am not paid for that, but I do care what I show publicly and call mine.

How did the «Beetle» end up in London?

I had this manager Ieva Andžāne work for me, and she did a research on which foreign galleries exhibit unique design, and she sent out some information. Jeff Salmon of London’s «Decoratum» gallery responded. He said it looked very well in pictures, but wanted to make sure so is the quality. We sent several works, and he said they were perfect. Later, after their request, we sent the «Beetle», which stayed in their showcase for six months. It was incredible! Then it was also taken up by «1stdibs», which is supposed to be prestigious. The next gallery, interested in a collaboration, is in Paris.

Which of your works has brought most satisfaction to you?

I like «Cress», a chest of drawers that looks like a perfect cube from outside. It goes with the current trend to be very ascetic. But I like things sophisticated, so inside I made the drawers round–shaped. My first serious project, the «Sharp Chair», also means a lot to me. I have it on a poster that says, «Furniture that catches the eye».

Also, there is a project left unfulfilled: a large tilted pendulum. Imagine a wide runner of impressive proportions, 20 meters long, with water containers on each end; when the water is being pumped from one side to the other, the runner sways. Being in a room with it, one should feel like one’s head begins to swim; the room’s perspective alters. I wanted to make it in the National Library, but the process stalled. I run on grandiosity. There is also an idea of an art project: a tunnel with many doors. When you enter the first room, the door behind you shuts, and you can’t go back, just like it is in life.

What happens to the ideas that you really wished but did not come to realize?

I look for ways to realize my ideas. If it hits a wall, I simply finish the model and put it away until better times. It’s a compromise, because it’s impossible to do nothing. Sometimes I feel like I’m on a playground — I want to play, but I’m bored with the old toys and want new ones. I want the things I’ve created to go somewhere; it also motivates me, and in this way a space appears for new ideas. 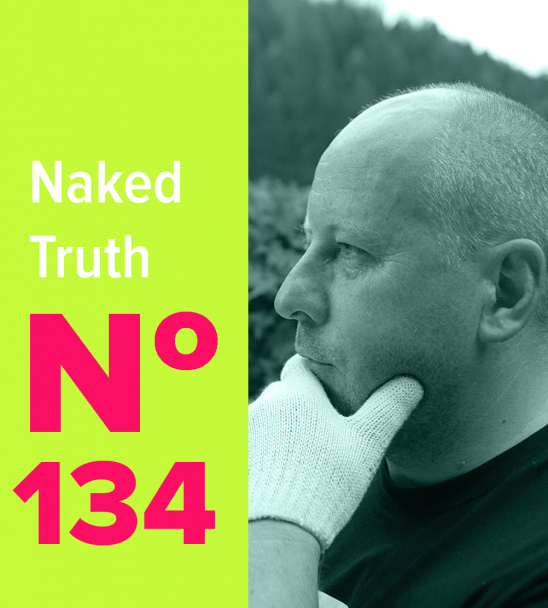 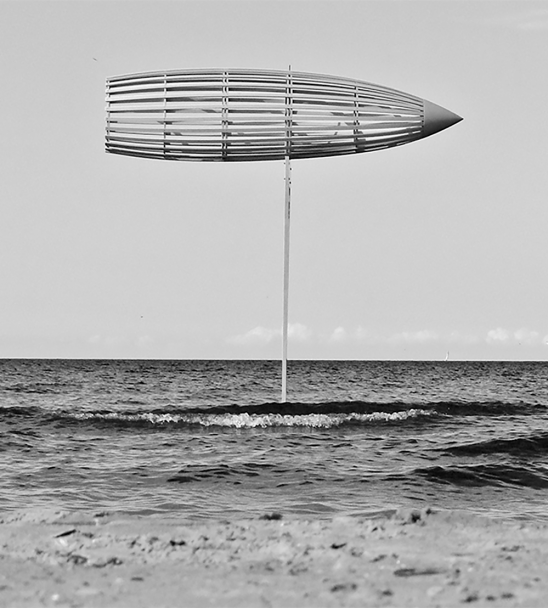